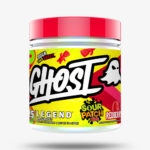 GHOST Legend V2 is a worthy successor to the original. To be honest, it is a huge step in the right direction for GHOST as well. Overall the effectiveness is solid, and should be suitable for many. While of course there are stronger pre-workouts out there, Legend V2 is still a solid option.

The experience is what really sets it apart. Not only do you get a solid pre-workout... you get an AMAZING tasting pre-workout, with good mixability, as well as a more than fair price point. With plenty of awesome flavors to choose from, GHOST Legend V2 is certainly worth trying out, and is great to have in you pre-workout stash.

We reviewed GHOST Legend V2 on five categories. We first start by looking at it’s ingredient profile. This portion of the review looks at the different ingredients used in the pre-workout supplement, what their intention is and how effectively dosed are each ingredient.

Then we move into the taste of the different flavors we’ve tried. We grade each flavor separately and average the scores for their overall taste rating. We were able to test out the following flavors: Cherry Limeade and Redberry.

GHOST Legend has two blends, the first being the GHOST LEGEND® Blend, and the second being the GHOST SMART ENERGY blend. The first blend starts off with 4 grams of L-Citrulline, which is probably the most common ingredient in pre-workouts after Caffeine. Citrulline converts to Arginine, which is a precursor to nitric oxide in the body. It can help with pumps and performance in the gym, and at 4 grams, is dosed well in Legend V2. The next ingredient is Beta-Alanine, which may as well be just as common as Citrulline. Beta-Alanine is a common ingredient in pre-workouts. It can help with endurance, and it is one of the most studied ingredients out there. It must be taken every day to achieve saturation, so taking it in Legend V2 will get you your daily dose.

Nitrosigine is the next ingredient in here, and it really adds to the pump experience. Nitrosigine is Arginine bound to Silica, and it has been shown to be better gram per gram than Citrulline for inducing pumps. At 1.5 grams, it is dosed well in Legend V2. Next up is Senactiv®, which is from NuLiv Science. It can help with energy and muscle preservation, and at 50mg is dosed well in Legend V2.

Now we have the SMART ENERGY blend, which starts us off with Tyrosine. Tyrosine is one of our favorite ingredients for focus, as it is a precursor to Dopamine and other catecholamines. It has been shown to be beneficial for focus under stressful situations, and at 1 gram, is dosed well. Next up is Taurine, which is a nice addition. Taurine may help with blood flow, hydration, and may help with cramping. At 1 gram, you are getting a solid dose.

Next up is Alpha GPC, which is a form of Choline. Choline converts to Acetylcholine in the brain, which is a neurotransmitter. It is one of the first ingredients we recommend for focus. At 300mg you are getting a decent amount in Legend V2.

Next up is everyone’s favorite… Caffeine. GHOST uses a Natural Caffeine for this one, and you get 250mg of it. 250mg is actually lower than the 300mg+ standard these days, and it’s nice to see a pre-workout not needing a huge amount of it. Of course, everyone’s tolerance is different, so some may still get a huge boost of energy out of this. This will all depend on tolerance. Following this is Caffeine’s cousin Theobromine. It may also help with energy as it is a xanthine (like Caffeine), without raising blood pressure.

AstraGin® is an ingredient GHOST likes to use a lot. It may help with the absorption of some ingredients and at 50mg, is clinically dosed in Legend V2. Finally, we have Rauwolfia, which is a source of Alpha-Yohimbine. This ingredient can help with energy, thermogenesis, blood flow, and more. It is usually quite powerful, however at a low dose only some may get the unwanted side effects from it.

GHOST Legend V2 is a well-performing pre-workout that hits pumps, energy, and focus quite well. The energy it provides is solid, however it may not be what stimulants-junkies are looking for. At 250mg of natural caffeine, you are certainly going to feel the energy, however for the more seasoned pre-workout consumer, it won’t make you feel cracked out. Think of it as a smooth boost in energy. One other thing we have to note, is that there is a boost in “drive”. Once you set is done, you are somehow already focused on the next set and can’t wait to get right back to it. Almost as if you feel the need to hit your next set or exercise immediately.

The pumps are solid, and even though many will stack this with Pump V2, it does well enough on its own. With 4 grams of Citrulline and 1.5 grams of Nitrosigine, you can expect a noticeable boost in pumps. The boost in focus in nice as well. With Tyrosine and Alpha GPC both at solid doses, as well as the Caffeine not being over the top, there was a fun boost in focus, and it really helps keep you focused on your workout and prevents your mind from wandering.

We had both the Sonic Cherry Limeade and SPK Redberry flavors, and both were awesome. The Redberry tastes pretty much exactly how you would expect a Red Sour Patch Kids to taste if it were in liquid form, so if you like the Red SPK, this is a no-brainer. It may actually be the best flavor we have ever had in a pre-workout.

We mixed 2 scoops in 12oz of cold water. Legend V2 is quite heavy on the dye, which may bother some. With that said the mixability is decent, with some particles floating around. The only thing we can really point out is that if you don’t swish your shaker cup around you may get some slight residue on the sides, however nothing bad. There are no clumping issues to speak about either, and nothing will ever get caught in your throat.

You can get GHOST Legend V2 for $45 directly from the GHOST website. This get you 25 servings, which brings the price to $1.80 per serving. This is a competitive price, however if you use coupon code INFORMANT, you get 20% off, which brings the price down to $1.44 per serving. This is a very fair price for what you are getting. For a well-rounded reliable pre-workout, it is a good deal.