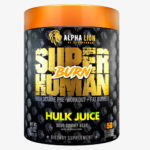 SAVE NOW: Use code INFORMANT to save 15%

SuperHuman is a pre-workout supplement that does more than simply give you energy and Beta-Alanine tingles. SuperHuman Burn is great for those who are on a cut and want an edge when it comes to fat loss. With the addition of MitoBurn and Grains of Paradise, it can certainly put one in a strong thermogenic state, and it is something we experienced here on Fitness Informant.

Burn provides a solid boost in energy and focus, as well as a great boost in thermogenesis. Even with just 10 minutes of working out, we were able to notice a strong sweat build up. With the SuperHuman line being so popular, this pre-workout gives fans of the original pre-workout a great option for cutting season.

We reviewed Alpha Lion SuperHuman Burn on five categories. We first start by looking at its ingredient profile. This portion of the review looks at the different ingredients used in the pre-workout supplement, what their intention is and how effectively dosed are each ingredient.

We then look at effectiveness. An effective pre-workout product will use high quality, proven ingredients, at clinically backed dosages.  This is generally an extension of the profile section. The higher quality ingredients used at proper dosages, the more effective the pre-workout will be.

Then we move into the taste of the different flavors we’ve tried. We grade each flavor separately and average the scores for their overall taste rating. We were able to test out the following flavors: Hulk Juice 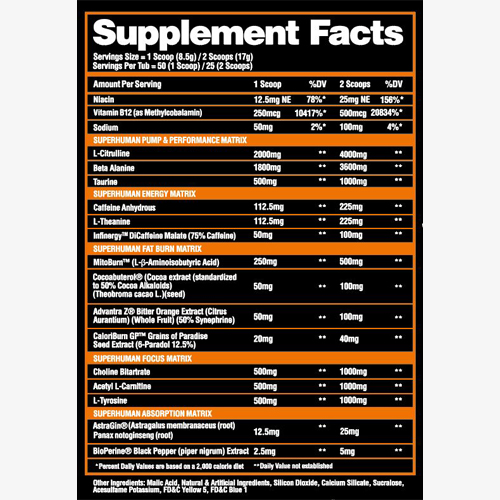 SuperHuman Burn starts us off with a “Pump & Performance Matrix”, which contains the three ingredients L-Citrulline, Beta-Alanine, and Taurine. Cirtrulline is a staple for aiding with pumps. It converts to Arginine in the body, which helps with Nitric Oxide production. At 4 grams, it is dosed well. To keep it simple, Beta-Alanine is an ingredient that may aid in endurance by buffering lactic acid. At 3.6 grams, it is dosed well. We must note that Beta-Alanine is a saturation ingredient that should be taken every day, therefore you should grab a standalone Beta-Alanine for days where you are not taking SuperHuman Burn. Finally we have Taurine at 1 gram. Taurine can aid with hydration and blood flow, and it is nice to see in Burn.

Next we have the SuperHuman Energy Matrix, which also consists of three ingredients. Those three ingredients are Caffeine Anhydrous, L-Theanine, and Infinergy™.  Caffeine is at 225mg, which is actually below the 300mg average. This is fine in our opinion, as Caffeine is a very personal drug, and will effect people differently. With that said, you are also getting 100mg of Infinergy™, which is a time-released Caffeine. It is 75% Caffeine by weight, so you’re getting an extra 75mg of Caffeine in here, which brings the total amount of Caffeine in SuperHuman Burn to 300mg, however part of it just hits you later, and may even prevent a crash. As for the Theanine, it can aid with anxiety brought on by stimulants. At 200mg, it can take the edge off.

Next we have what really makes this version SuperHuman deserve the title of “Burn”. The SuperHuman Fat Burn Matrix starts us off with a brand new patented ingredient on the market called MitoBurn™. This is an ingredient called L-BAIBA, and it is a new take on fat loss. When you exercise, your body releases a myokine called BAIBA. This ingredient has been shown to reduce blood sugar as well as increase fatty acid oxidation. It is relatively new to the market so it will be interesting to see how it does on the market, but we are happy to see Alpha Lion go ahead and use it. At 500mg, it is dosed well.

The next three ingredients are Cocoabuterol®, Advantra Z®, and CalorieBurn GP™. Cocoabuterol is a source of antioxidants and may aid in fat loss. Advantra Z is a source of Synephrine, a mild beta-agonist. It can aid with energy and fat loss, and at 100mg, supplies 50mg of Syneprhine, which is a solid dose. Finally, We have CaloriBurn GP™, this is a trademarked form of Grains of Paradise. Grains of Paradise has some human studies showing it to help with fat oxidation, and at 40mg is dosed well in Burn.

SuperHuman Focus Matrix is up next, and it starts us off with 1 gram of Choline Bitartrate. Choline converts to Acetylcholine in the brain, which is a neurotransmitter and may aid in focus. Choline Bitartrate is a poor form of Choline, and has poor bioavailability. At 1 gram it is dosed higher than most other product on the market. Next up we have Acteyl-L-Carnitine. This is a form of Carnitine that can cross the blood-brain barrier quite well, and has some human studies showing it to be beneficial for focus. At 1 gram, we like the dose. The Last ingredient in this blend is Tyrosine. Tyrosine is a precursor to L-Dopa, which converts to dopamine. It can aid with focus, and at one gram is dosed well.

Finally we have the Absorption Matrix, which contains AstraGin® and BioPerine®. Both are ingredients that may aid in absorption of certain ingredients, and both are dosed well.

SuperHuman Burn really delivers on its name. Let’s take a look at the energy, pump, and for this special pre-workout… thermogenic feel.

The energy from SuperHuman Burn is good and not overpowering. It certainly isn’t for stim-junkies, or those who are used to SuperHuman Supreme, but it still delivers. The energy is on the clean side, and there is no crash to speak of. As for the pump, there is a nice increase in pump, however it’s not the strongpoint of this product, which is no surprise as that’s not the main point of SuperHuman Burn.

The best point of SuperHuman Burn, is the burn. Within 10 minutes of working out, even just through the warmups, there was a noticeable increase in sweat. There is an noticeable increase in just an overall thermogenic feel, and the sweat pours! It’s on par with GBB as far as sweat goes for us. Seriously, this aspect is why it deserves the name Burn.

Overall this pre-workout fits the name, and that is why we like it.

We had the Hulk Juice flavor, and it is a take on sour gummies. It is pretty good, however with sour gummies being a pretty divisive flavor, we doubt everybody will like this. Even with the Grains of Paradise, there is no noticeable spice flavor to SuperHuman Burn, even at 2 scoops. It’s not perfect, but it’s still pretty good.

SuperHuman Burn mixes quite well. While there is some light sediment floating around the tub, you don’t notice it and nothing gets caught on the sides of whatever you drink Burn off of. Not much to complain about here.

You can get a tub for about $59.99 directly from the website. If you use coupon code INFORMANT you get 15% off, $1.02 per serving. That is an awesome deal, and a great sweaty workout will cost you around $1.02-$2.04. For a solid well-rounded pre-workout, this is on par with many other great pre-workouts on the market. It is worth trying at least once if your goal is fat loss.