As far as effectiveness goes, this is currently one my favorite pre-workouts. The focus and energy is solid at both 1 or 2 servings, and if you’re a responder to Dynamine, this is a must try.

The Pink Stardust may not be the perfect flavor, but it is by no means bad, and may even be enjoyable to some, just not as enjoyable as the energy you get from this. Taste isn’t everything anyway, and with the other options they have, you’re bound to find something you like. Give this pre-workout a try, we’re 99% certain you will enjoy it.

We reviewed Primeval Labs Mega Pre Black on five categories. We first start by looking at it’s ingredient profile. This portion of the review looks at the different ingredients used in the pre-workout supplement, what their intention is and how effectively dosed are each ingredient.

Then we move into the taste of the different flavors we’ve tried. We grade each flavor separately and average the scores for their overall taste rating. We were able to test out the following flavors: Pink Stardust. 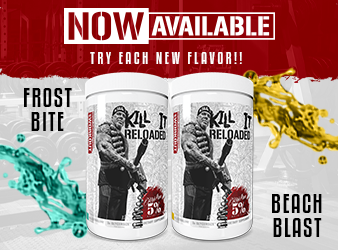 Mega Pre Black is the evil half-brother of Mega Pre from Primeval Labs. While not evil in the sense that it’s trying to take over the world, more like it is a stim-based pre-workout that will keep you coming back for more. To start, there is no proprietary blend, which is almost expected these days.

Before I list out these ingredients, I have to mention that Mega Pre Black is a 1-2 scoop product. For the clinical doses of some of the ingredients in here, you must take 2 scoops. So the amounts that I will be listing are based off of 2 scoops.

The first ingredient is the amino acid we all know and love, L-Citrulline. Your body converts L-Citrulline to L-Arginine, which converts to NO2 (Nitric Oxide). To keep this short and simple, it’s a great ingredient and it should help induce some nice pumps.

Beta-Alanine is next on the list. Beta-alanine is a common ingredient thrown into pre-workouts for multiple reasons. The main reason is that it is proven to buffer lactic acid production in the body during exercise, which equates to greater endurance. Mega Pre Black uses 3.2 grams, which is the clinical dose.

Next up, we have Betaine Anhydrous. Betaine may potentially increase power output. Although it isn’t as proven as creatine or beta-alanine, it seems to be on the uprise in popularity. Here we have 3 grams, which is actually higher than the clinical dose for power output.

So now we get to some of the “fun” ingredients, the nootropics and stimulants. Choline bitartrate is a cheaper form of choline when compared to ingredients such as Alpha-GPC and CDP-Choline, but when used at higher doses it may still be effective. At 2 grams, you should be able to get some boost in mental cognition.

Next up, we have an awesome ingredient called methylliberine, also known as Dynamine. Dynamine has been growing in popularity over the past year, and for good reason. This new stimulant, which is very similar to TeaCrine (another Compound Solutions ingredient), can provide energy without vasoconstriction (reference). Here we have 325mg of Dynamine standardized 40% of methylliberine, which gives us 130mg. You typically see companies use around 100mg, so Mega Pre Black is dosed very well.

To go with Dynamine, we have everyone’s favorite ingredient, caffeine anhydrous. 2 scoops gives you 325 mg. Like every review on caffeine containing pre-workouts, I have to mention that there is no real “optimal dose” on for caffeine, as tolerance varies from person to person. With that said, 325g of caffeine is on the higher side, and even stim junkies should get a boost out of this amount. If 325 mg isn’t enough for you… you have a problem.

L-Norvaline is next on the list. To keep this simple, norvaline inhibits arginase, which breaks down arginine. It’s a well studied ingredient and with most companies using 100mg, the 300mg in Mega Pre Black is just about as good as it gets.

Next up is ElevATP, which is ancient peat and apple extract. ElevATP increases ATP levels (adenosine tri-phosphate). The clinical dose is 150 mg, which is what Primeval has in here, so good job there.

DiCaffeine Malate (Infinergy) has also been thrown in this. This is a buffered form of caffeine, which can keep the energy you get from Mega Pre Black to last longer, while preventing oa caffeine crash. Since dicaffeine malate is 73% caffeine, you’re getting an extra 50 mg of caffeine to add to the 325 mg of caffeine. According to math, that 375 mg of total caffeine in Mega Pre Black! This should please all stim junkies.

N-Methyltyramine Hydrochloride is a beta-2 agonist. Here it is dosed at 50mg. It won’t do too much on its own, however when paired with caffeine, it may provide a nice energy boost. The half-life is only 5 minutes, so it may be short-lived.

Now we’re down to the final 2 ingredients. Hordenine Hydrochloride is in here at 50 mg, which is nice because it can actually be effective at 20 mg. So good job Primeval Labs.

Mega Pre Black has been the most enjoyable stim-based pre-workout I have used in the past few years. The amount of caffeine is solid at both 1 or 2 scoops. If you want a boost of focus and energy, simply take one scoop and stack it with some sort of pump product. If you want a workout with great energy and an uplifted mood, go with 2 scoops.

As for pumps, they are there, I’d just recommend stacking it with some Vaso6 or some Nitrate based pump product. 3g-6g of l-citrulline is nice, but with so many other ingredients out there to add onto that, it is worth adding onto that. Still, the energy, mood, and focus alone, it’s worth using as a standalone.

On the front of Mega Pre Black’s “Pink Stardust” flavor, there is a nice picture of what looks like unwrapped pink Starbursts. Now since that is my favorite kind of Starburst, I was more than excited to grab a tub of this. Well, from what I hear, this is the most disappointing flavor. While it isn’t bad, it certainly doesn’t closely resemble those pink cubes I love so much.

To be fair, some of the ingredients in Mega Pre Black may be hard to cover up, especially at their higher doses. I’ve also heard that the other flavors are a bit stronger, which may make them more appealing.

Mega Pre Black mixes very well. The only reason I am taking any points off is for the residue that floats around, where little can be done due to certain ingredients in here. There are no clumps to speak of, so the only points taken off here are  for the residue, and some may get caught on the sides of your shaker cup, but a few “swishes” with your shaker cup and you should get most if not all of it.

Mega Pre Black goes for $50, which gets you 20 servings when you use 2 scoops. With the dosing being on point, and the effectiveness being so good, this is a reasonable price. There are usually great sales on websites such as A1, which actually have prices that make Mega Pre Black worth stocking up on.